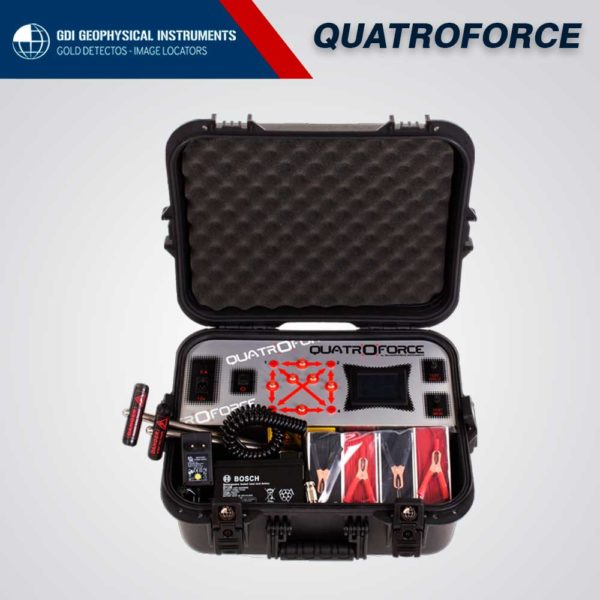 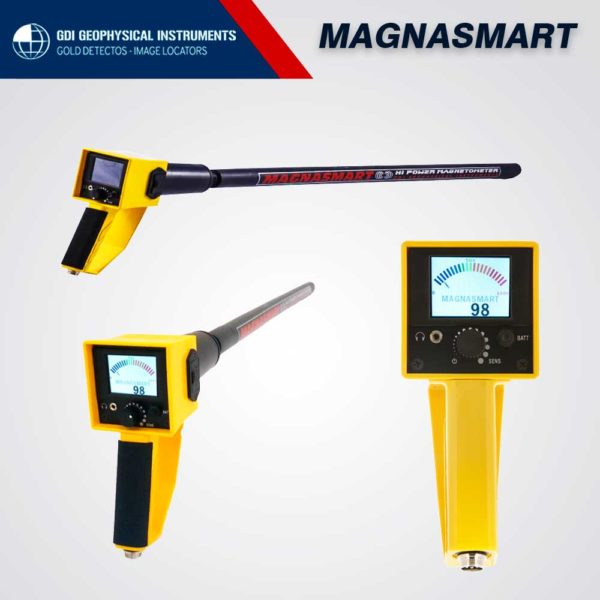 Direct detection device with 3D analysis of all kinds of precious treasures, burials and space to a depth of 30 meters, from the best modern global Greek industries.

You can pay by: 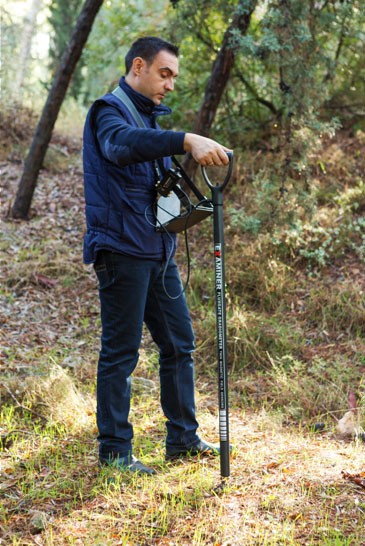 • The GEO EXAMINER itself is a portable 9″ touch screen computer. it has no buttons, switches or adjustments, to operate it simply use the stylus pen or your finger tip on the TFT lcd. GEO EXAMINER has 3 integrated systems for the price of one:GEOPHYSICAL: GEOPHYSICAL -for the detection, and graphical separation of metal targets from voids and other geological features. Uses ground transmitting and receiving probes for data collection. The geophysical system is offered either in 4 probe or 22 probe operation.
• The GEO EXAMINER analyses digital the signal from pairs of transmitting and receiving probes continuously. Working with probes is like “X-raying”, the soil between the probes is scanned by the induced signal up to its last centimetre, and all structures laying in it make their presence.
• GEO EXAMINER probe signal is ELECTRICAL and it has a direct connection to the ground through the probes, the ELECTRICAL signal travels through minerals and wet ground without loosing its penetration ability.
• Ground radars and VLF systems use ELECTROMAGNETIC signal, the ELECTROMAGNETIC waves are transmitted aerial towards the ground, minerals and wet ground often absorb them and the depth is reduced significantly.

• The GEO EXAMINER ELECTRICAL signal encounters ground resistance and takes the path of least resistance to travel from transmitters to receivers.
• Precious metals in the ground due to their conductivity create LOW electrical resistance and attract the EXAMINER signal.
• At the opposite voids due to the air trapped inside them create HIGH electrical resistance.
• Therefore voids, caves have a high Soil Data profile while metals indicate low. Conventional instruments on the market use only one transmitter and receiver, but the EXAMINER is a league of its own!
• Its twin transmitter / receiver will push the signal at even greater depths than single ones, will also detect small changes in ground geology, the result is better accuracy, better depth, more resolution from underground.
• The EXAMINER is adjustable to all ground types, cancelling out errors from minerals and wet ground.
• Also the signal has 8 gain levels for selecting the suitable on every area.
22 Probe geophysical: Select “22 Probe” and click on “START X 10”, underground data are automatically collected and viewed, from 2 multi-cable strings of 17 meters and 11 electrodes each. This is a great advantage over conventional geophysical systems on the market that use only 4 electrodes which make the field work time consuming – with poor images. The multi rod data acquisition is found on geophysical locators that retail twice the cost!
• Storing of values, co-ordinate field settings and target imaging are operated by the instrument. The automatic EXAMINER data collection will speed up your field work, but is not only accelerated is also enhanced and provides much detailed pictures! For 22 probe survey the “22 Probe module” is needed, along with the multi cable strings shown above.
4 Probe geophysical:
• A conventional 4 electrode survey using 4 x 10 meter cables, the operator moves manually the transmitting and receiving probe pairs, controlling data storing.
• A useful mode for limited spaces, target pinpointing or where finer surveys are in demand.
Magnetometer survey2: The magnetic components of the soil «iron oxides», have been created at the time when earth was a burning magma, and have been dispersed in the soil at a varying percentage for every area. Human constructions distort the natural soil magnetism by creating stronger or weaker in strength magnetic materials. For example a void in the ground, ferrous metals, stone foundations, walls from ceramic bricks, a ceramic vase, a pit and in general objects or constructions originated by fire or those that have been fired or burned, show a variation from the soil magnetic field.
• Also the ground surface is by nature more magnetic than the subsoil, since it receives for million years rain and heat – both factors that enhance the magnetic components. As a result every human excavation distorts the top soil magnetic components, generating a change on the local magnetic field. The EXAMINER gradiometer antenna consists of dual magnetic field sensors, positioned in line at 80 cm apart for increased sensitivity.
• The survey is been carried out on normal pace with real time data capture and visualization.

Features of the Examiner device

• No time lost to record the area and then send data to a computer to see what you have found.
• As you walk with the sensors or while you moving the probes – depending the mode you use – the GEO EXAMINER shows the underground image immediately.
• Professional users can also use filters to reveal the images manually adjusting the target strength from the background soil interference.
Choose the graphics you want before or while you investigate:
• 3 high resolution graphic types offered to select from. Grid blocks are colored according the data variations, has a target depth calculator and co-ordinate indication, this way you see exactly where the target is and you can pinpoint it again at your next visit.
• The high resolution graph – that smoothes out the targets shapes outlining their properties, colourful and detailed. The highest resolution ever rotatable graph – select the area part you want, or just click on 3D to see the whole 3D view of underground that is automatically rotatable to investigate target shapes from any viewing angle, from 0 to 360 degrees. Numerous features for all graphic types assist to target analysis.
• World war II bunker found by one of our customers using the EXAMINER magnetometer
• Displays the front side of a bunker and it’s entrance as a small red “extension”. Depth of the found: 2.5 m.
• Scattered at the front area are small metal fragments, that are easily recognized compared to the solid and vast view of the bunker.
• The SWEEP LINES co-ordinates are the lines the user walked, while the POINTS are the steps.
• Total 14 sweep lines with 14 steps on each for this survey.
• EXAMINER displays with the graph these co-ordinates to pinpoint the target accurately.
• The user knows this way which of his steps and sweep lines cover the target.
• The graph has a 310 degree viewing angle while it can be rotated to a full 0 – 360 degrees view.
• At left the colour to data scale according to the acquired soil data.
• Note that there is a great variation between the soil data (blue) and the target (red).
• Metal box in 3D scan by GEO EXAMINER in 4 probe mode. 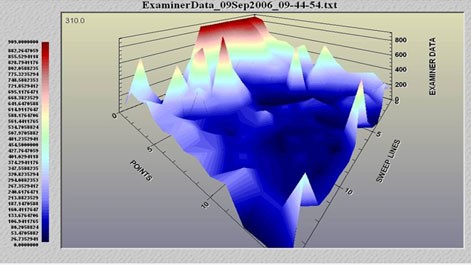 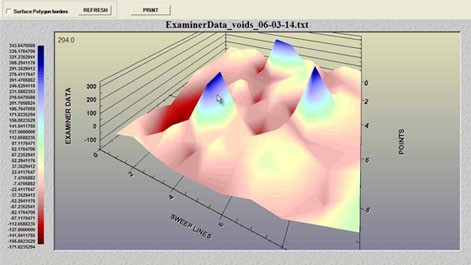 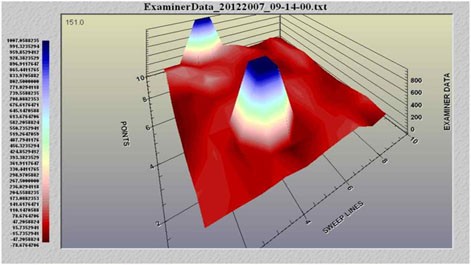 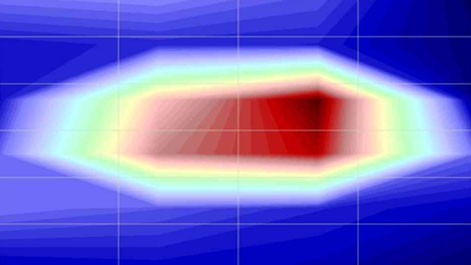 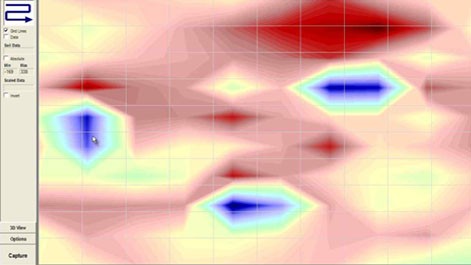 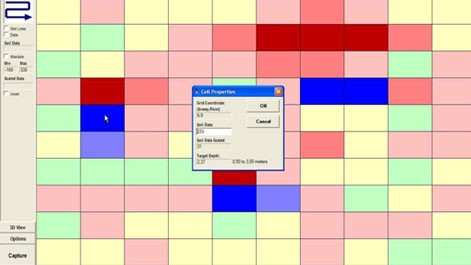 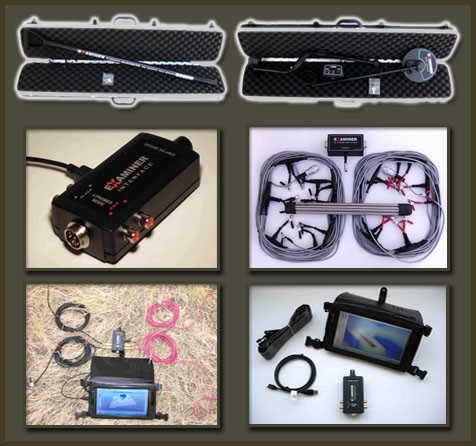 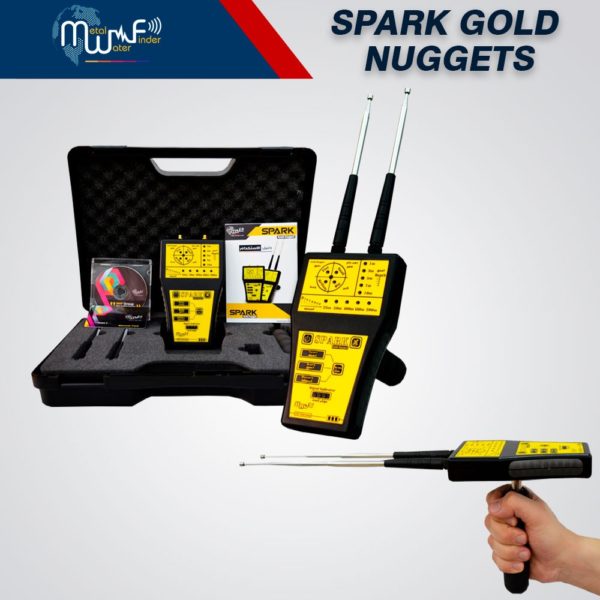 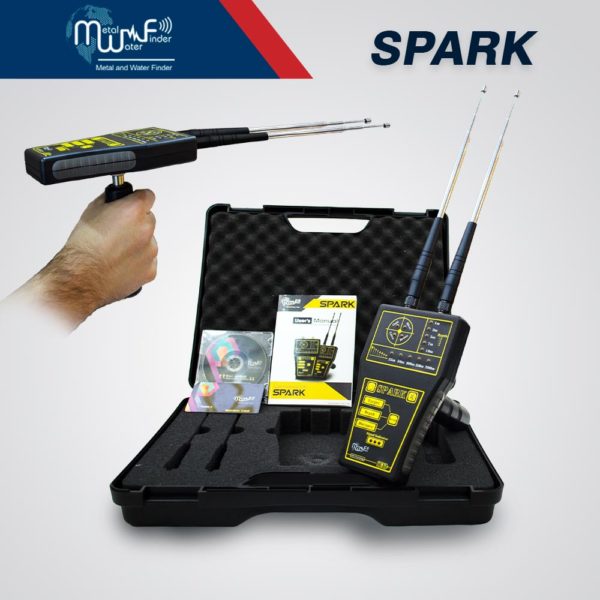 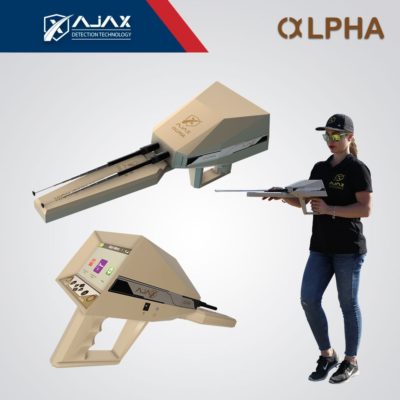 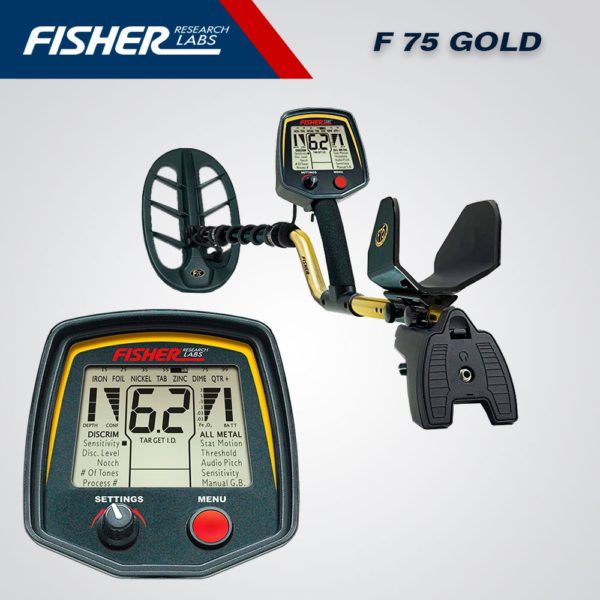 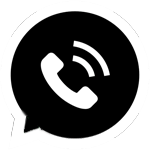 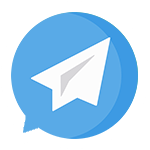